Max Bill is uncontestably the best known post-War Swiss artist; he also stands as a model of a complete artist, active in teaching, architecture, design, and cultural politics. The idea behind the presentation of this “hut” in Geneva is to alter the perceptions of the artist’s public works. The possibility to sit down and find a form of hospitality in this simple, geometric structure, which is typical of Concrete art, opens up a new dimension in the reception of Bill’s work. 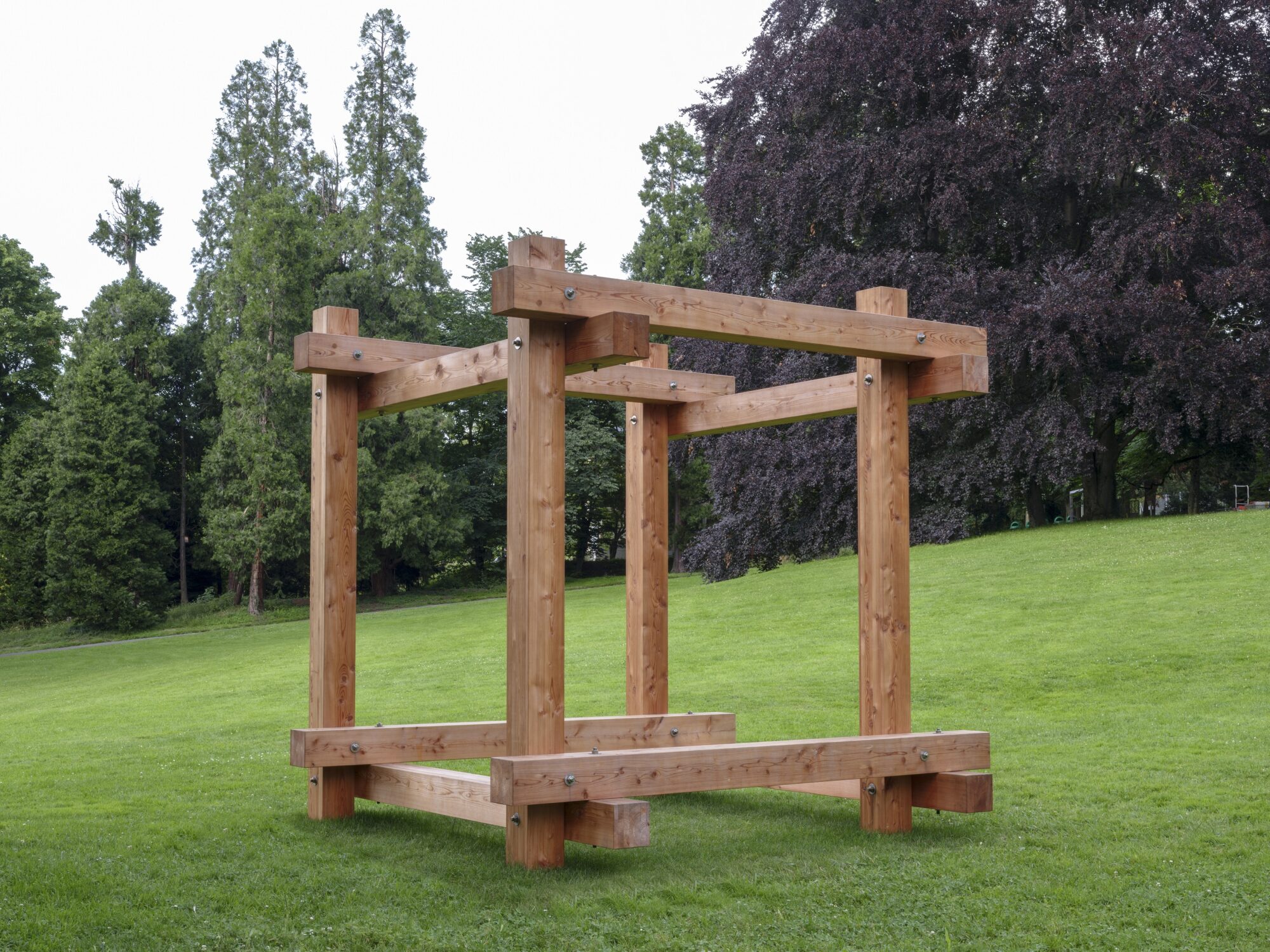 Welcoming the visitors to the entrance of the building of contemporary art, during the extremely popular retrospective of the Genevan artist at MAMCO, these flying saucers are unique models, inspired from US sci-fi, with different finishes, based on the shades of nail polish. As in all Fleury’s projects, this encounter between opposing vocabularies and the “female customization” of cultural elements trigger a critique of the modernist canon. 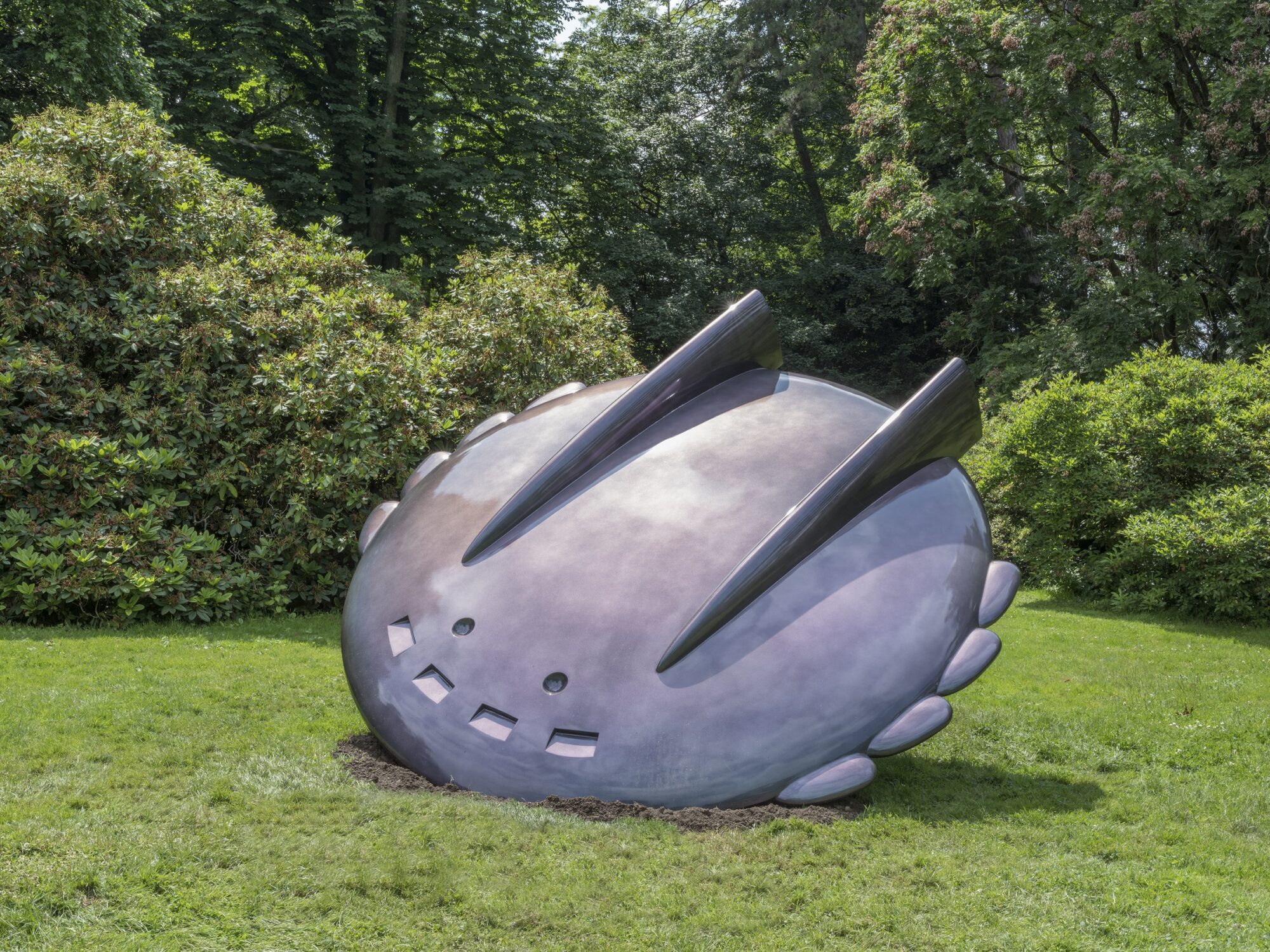 For Gupta, who has for over a decade represented the dynamism of the Indian artistic scene, as for his Chinese counterparts Ai Weiwei or Chen Zhen, the point is to mix a Western cultural form (here, for example, Constantin Brancusi’s Endless Column) with objects coming from traditional ethnic practices (the bucket and anodized metal). The meeting of these two universes produces the synthetic, hybrid forms which run through the artist’s work, but also our globalized society.

With the breadth and richness of his work, the artist renews the way sculpture is being approached and practised in the 20th century. The refined and simple language used is at the service of his ever exuberant imagination, as fertile as a child’s would be. Acquired by the City of Geneva’s Contemporary Art Fund (FMAC) in 1984, this imposing stabile with an evocative title illustrates the artist’s fascination for circus, as much for its inventiveness than for its games of balance. Made from steel and rivet–raw material borrowed from the manufacturing area–as well as shapes which sobriety stands alongside abstraction, this sculpture evokes the landscape solely with black curves and counter-curves in the same way a drawing in space would. Now placed permanently, it blends in with the surrounding architecture and public space with great sensitivity. 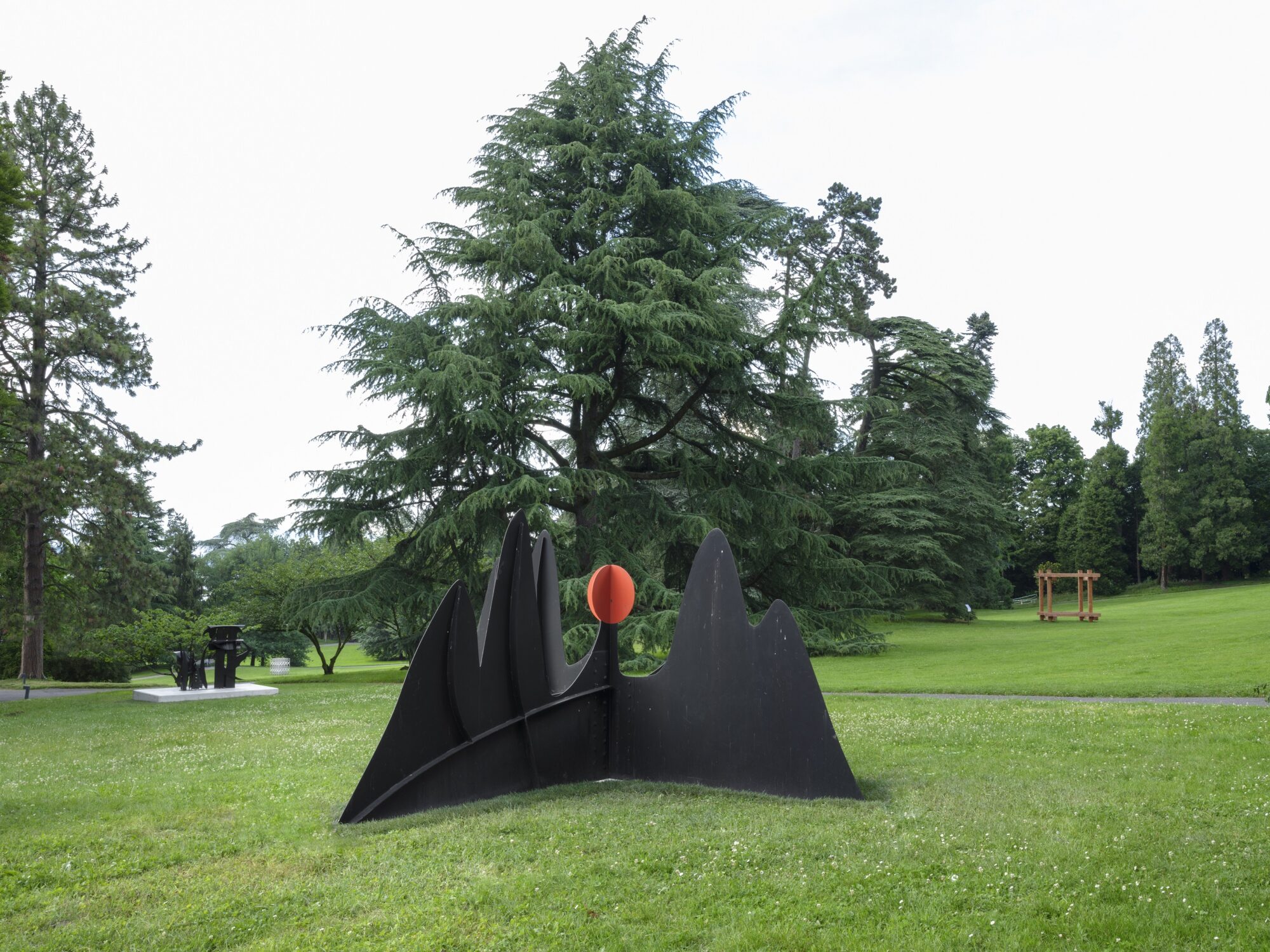 Already present in the park, Calder’s sculpture provides a good example of the “Stabiles” which the artist, famous for his “mobiles,” produced over decades. The addition of a sculpture of the same period by Louise Nevelson, provides a counterpoint to the classic modernism of the American artist. Both works refer to the transformation by an artistic language of naturalist representations, be it a “sun over a mountain” or a “transparent horizon.” 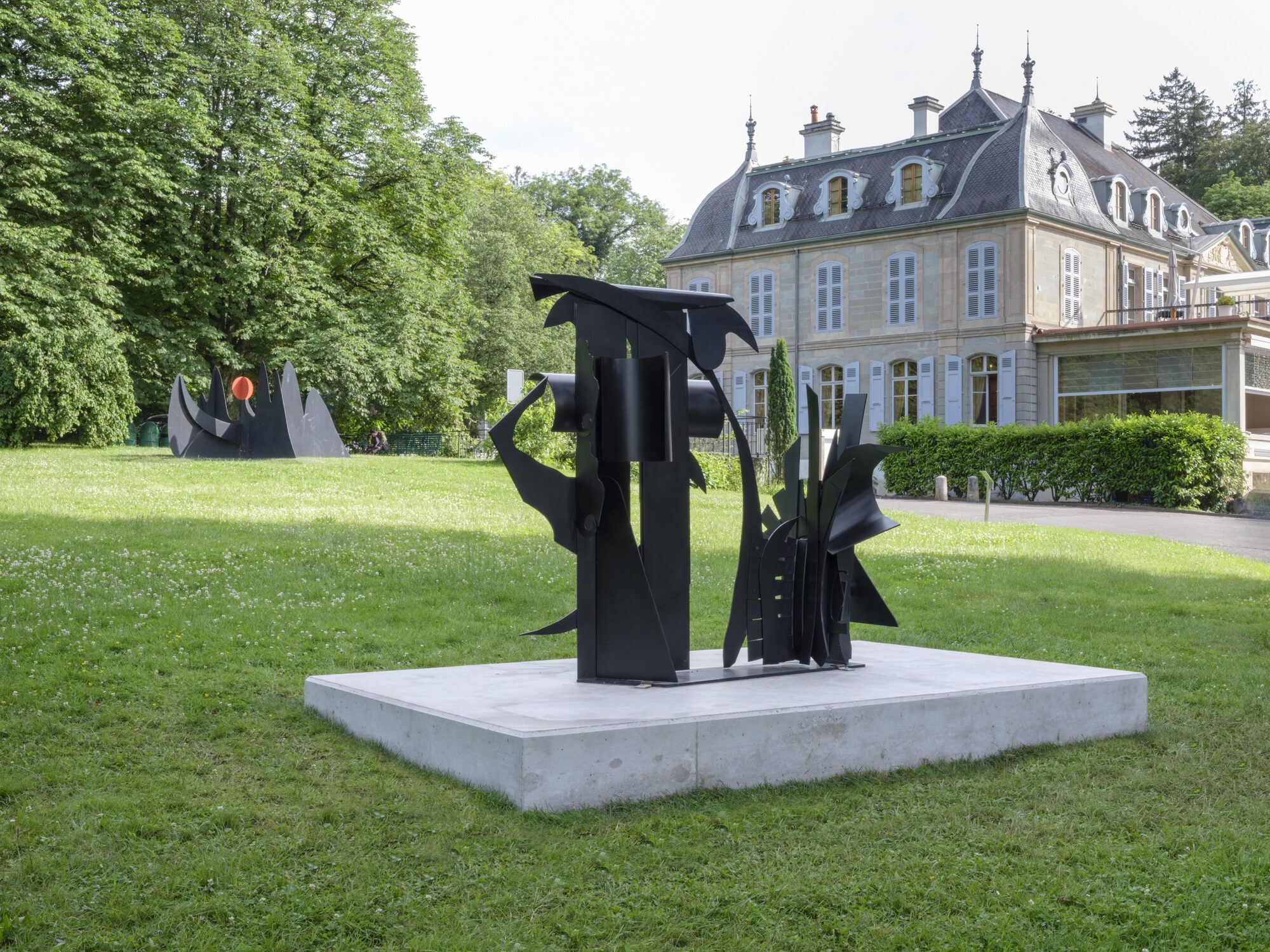 Mai-Thu Perret, a Swiss artist with Franco-Vietnamese origins who lives in Geneva, has managed to develop a practice that crosses over disciplines (from sculpture to film, taking in ceramics and performance), multiplies references (from 20th-century artistic movements to oriental philosophies), and merges methodologies (making use of her literary studies as well as her curatorial experiences). While adding, year by year, bodies of work to her practice like so many chapters in a concrete, existential fiction, Mai-Thu Perret does far more than just excavate the elements of modernism: she resets them in our present time, giving them the role of narrative triggers for the spectators. In this way, the bronze organs on display in the park (a heart, lungs, and uterus) act both as the intimate depictions of bodies and ritual chimes, inviting the visitors to think in different terms about the relationship between the body and nature. 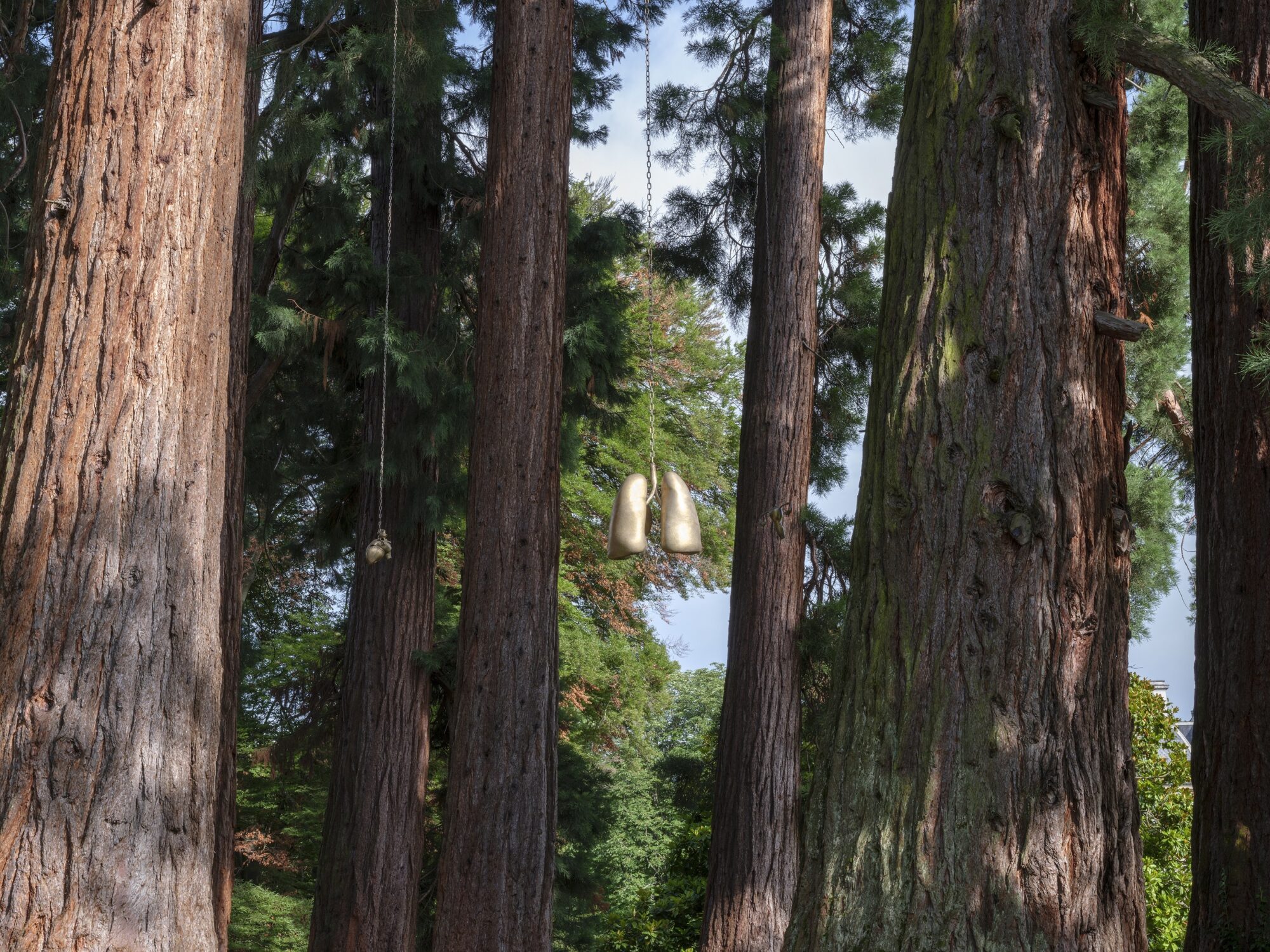 While MAMCO hosts the first international retrospective devoted to the Pakistani artist Rasheed Araeen, it seems appropriate to offer the public an on-site activation of one of his “structures,” a geometric meditation on the form that he has been producing since the end of the 1960s. The artist has proposed to recreate this work to resonate with its first context of presentation, across the lake, in the United Nations Park, in an exhibition organized by Adelina von Fürstenberg more than 20 years ago. Ideally, the work’s destiny would then to enter into Geneva’s public collections, as it is now so connected with the city. 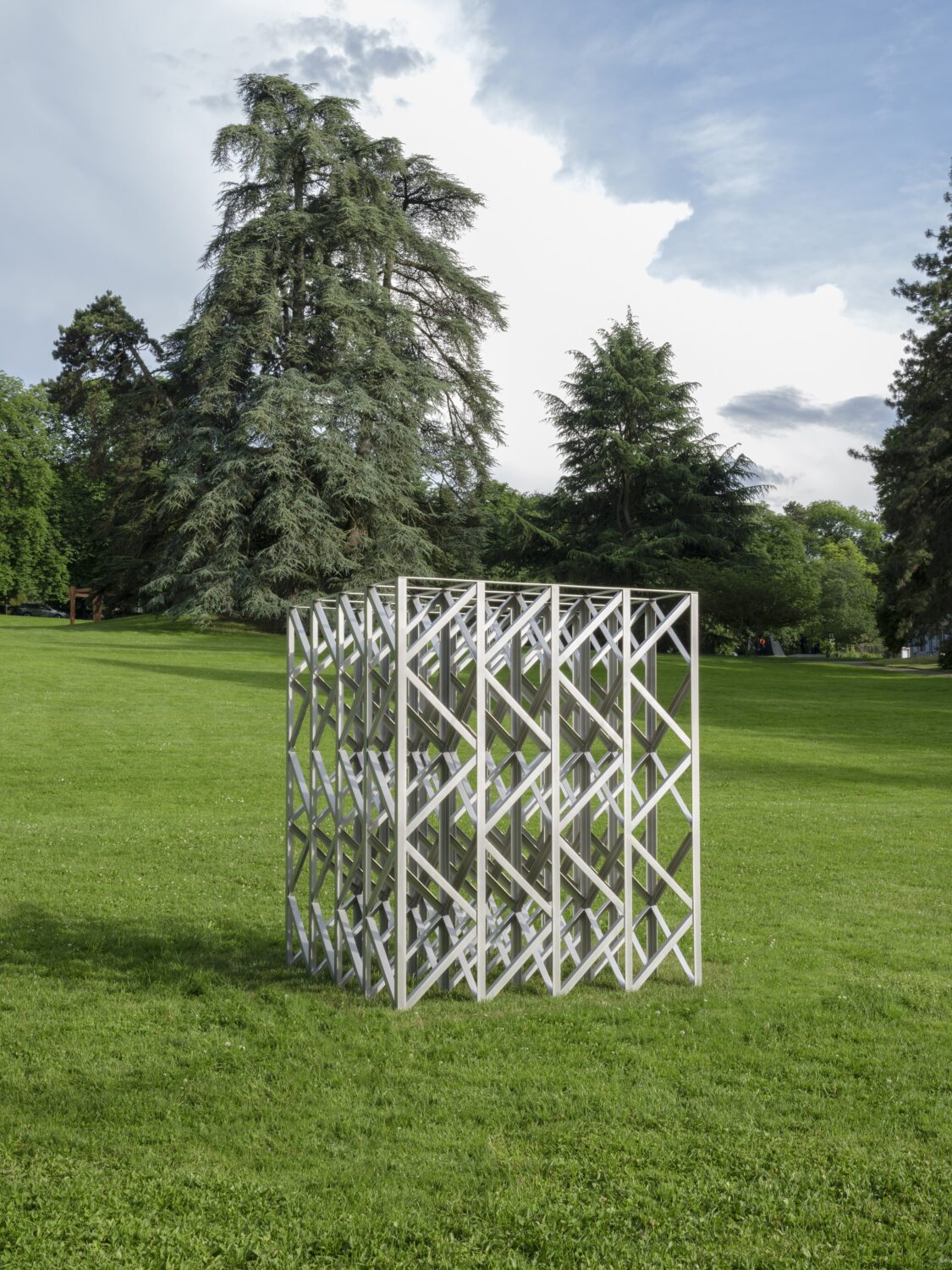 Since the 1990s, the Swiss artist has been producing pieces the perfection of whose production conceals a nostalgic and romantic dimension, and which he assembles in his shows like the parts of a stage set, so as to conjure up a particular sentimental state. The series of works made of moulded, enamelled aluminium evokes trees that have been struck by lightning or dried out by a natural phenomenon, creating a fascination thanks to their ambivalence between nature and artifice. 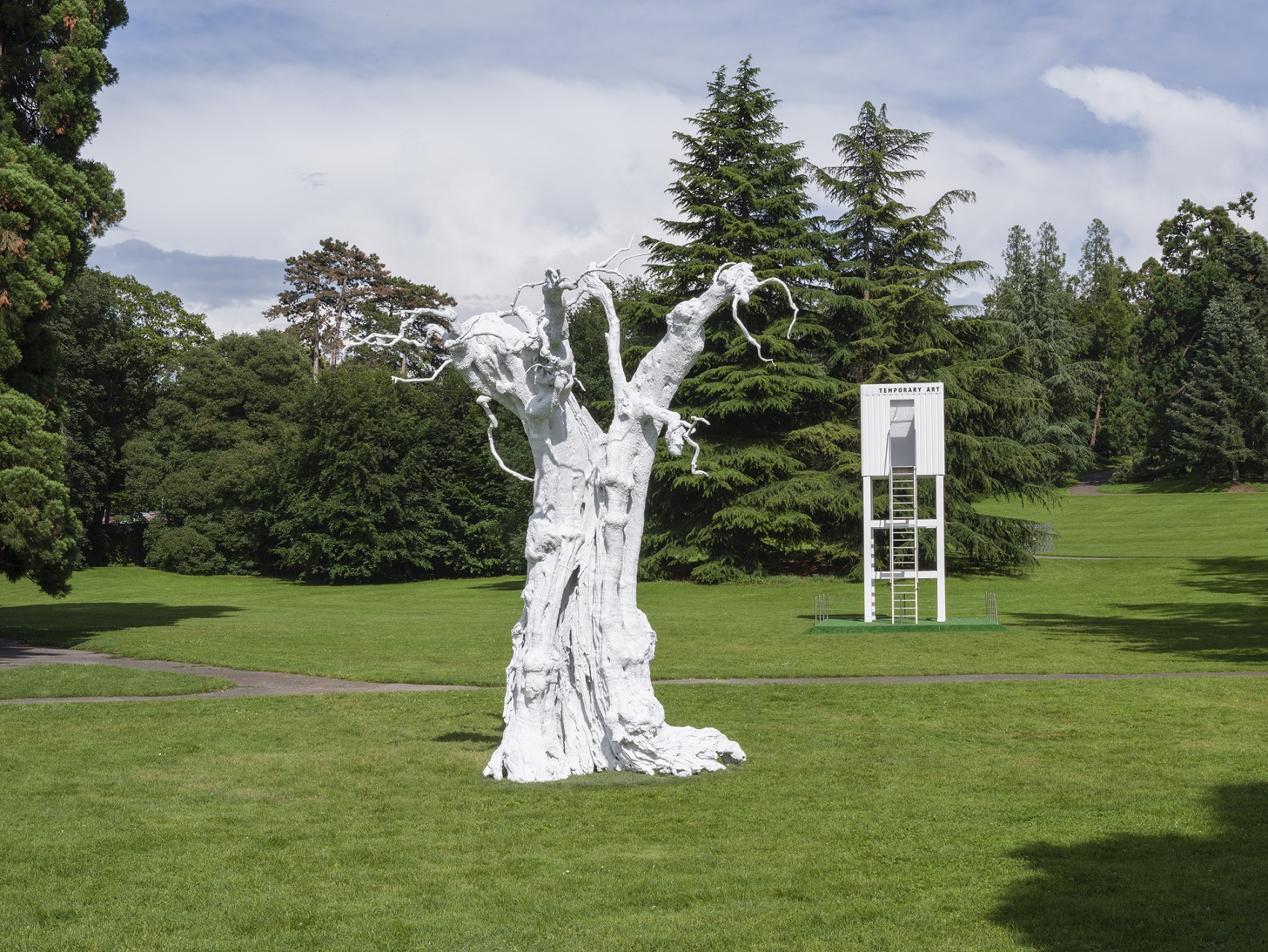 This Scandinavian duo is known for their provocative and monumental installations: they built a Prada boutique in the middle of the desert in 2005, “drowned” a collector in his pool at the Venice Biennale in 2009, and presented a gallery booth in the empty Grand Palais, a week before the FIAC 2016… This irreverent, ironic practice is intended to be a way to examine the world of art and its institutions. The sculpture being presented is part of their series of “powerless structures,” thus proposing a museum prototype in a beach hut. 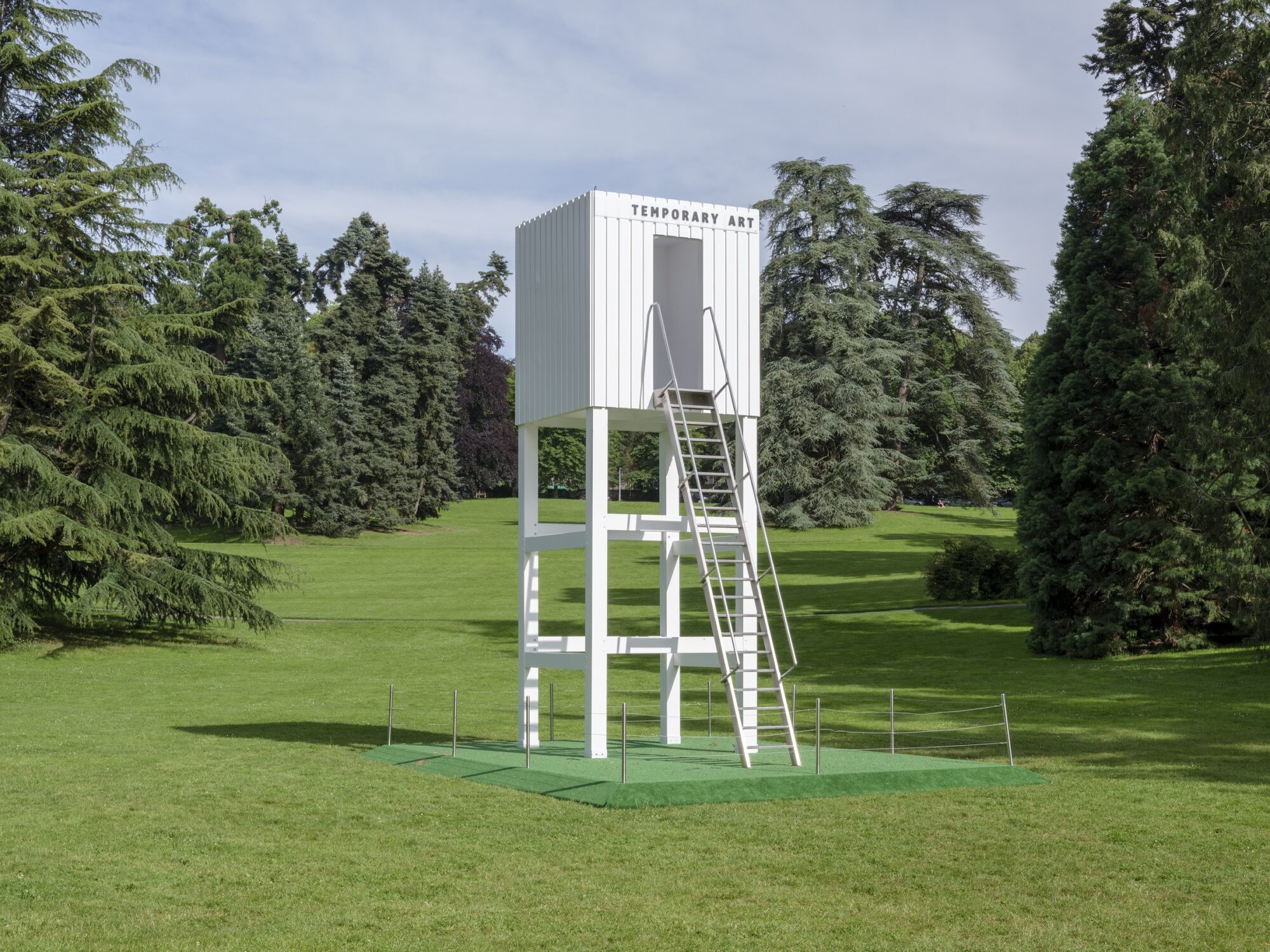 In her sculptural practice, the French artist takes an interest in the modification of elements present in the urban environment and the paradoxical encounters of techniques: here, for example, a functional, manufactured telephone booth in which has been inserted a trivial, deformed object, invites to conflate technology and obsolescence with formal vocabulary and functionality.

With its blow-ups of replicas of several different mushrooms, this large scale three-dimensional collage is a work by the German Carsten Höller, internationally known for his interest in the phenomena of perception and modified consciousness. The piece alludes to several hypotheses made in the 1960s, which associated the evolution of mankind with the consumption of mushrooms containing psychotropic substances that might be responsible for the plasticity of the human brain.

The American artist, based between Los Angeles and Paris, has been developing works which are midway between sculpture and architecture, or a habitat and a ruin, taking on in his own way the principles of Minimal and Land art. After working for the architecture studio of Vito Acconci, he established a personal vocabulary through projects that willfully go beyond the limitations of exhibition spaces or suggest a world outside the field of art. Quite logically, Oscar Tuazon has been invited to take part a large number of projects in public spaces. The work being exhibited in Geneva was first shown in Zurich, where it was presented as an unlikely example of city lighting and a place to meet up. 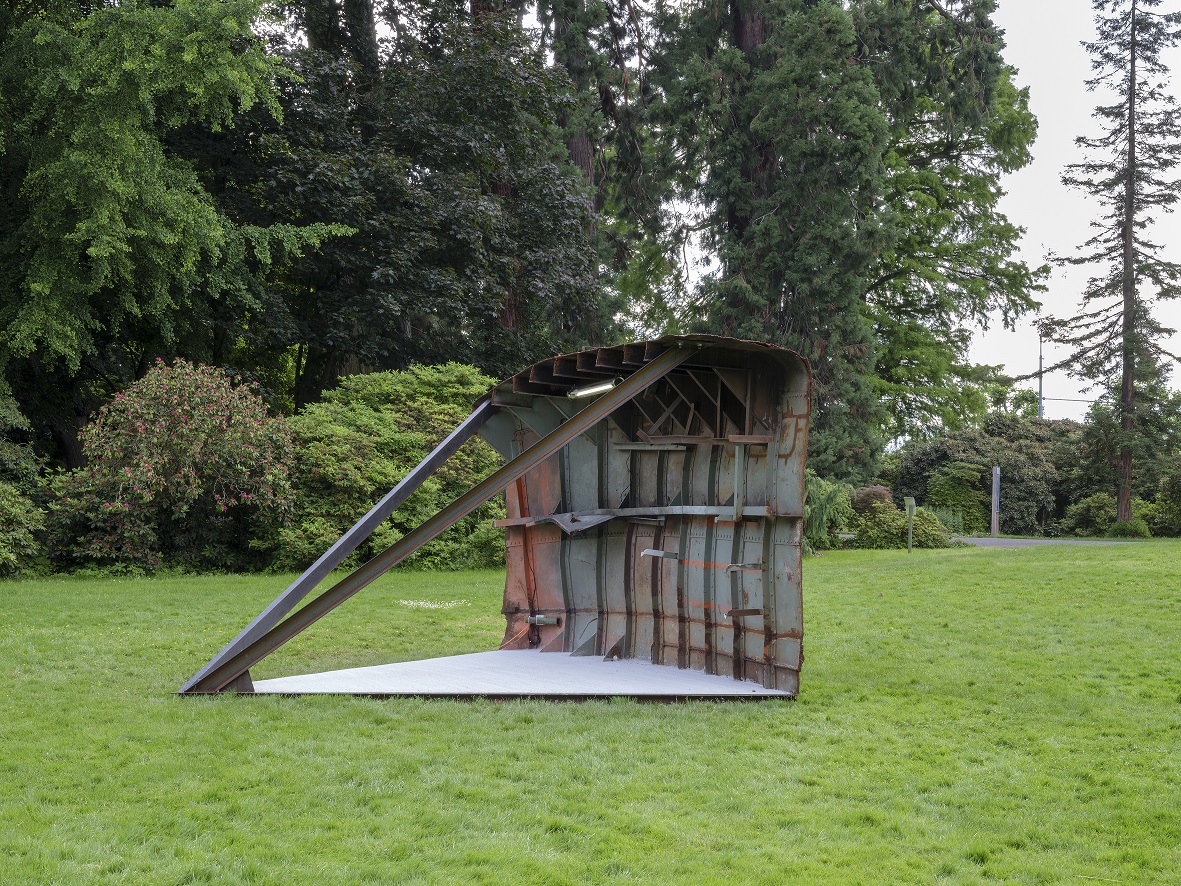 The work presented by the young American artist describes in its subtitle its various supposed actions: as a healing pavilion, it incites calm, balance, and peaceful sleep, soothes frayed nerves, triggers endocrine system healing and mental organization, offers stress relief, helps kidney function as well as to overcome fear, removes fatigue and writers block, and invites patience, truthfulness, and unconditional love. The artist proposes visitors to experience his elegant double bench, and invite them as much to a dialogue as to look inside themselves, as it is promoted by West-Coast esoteric culture. 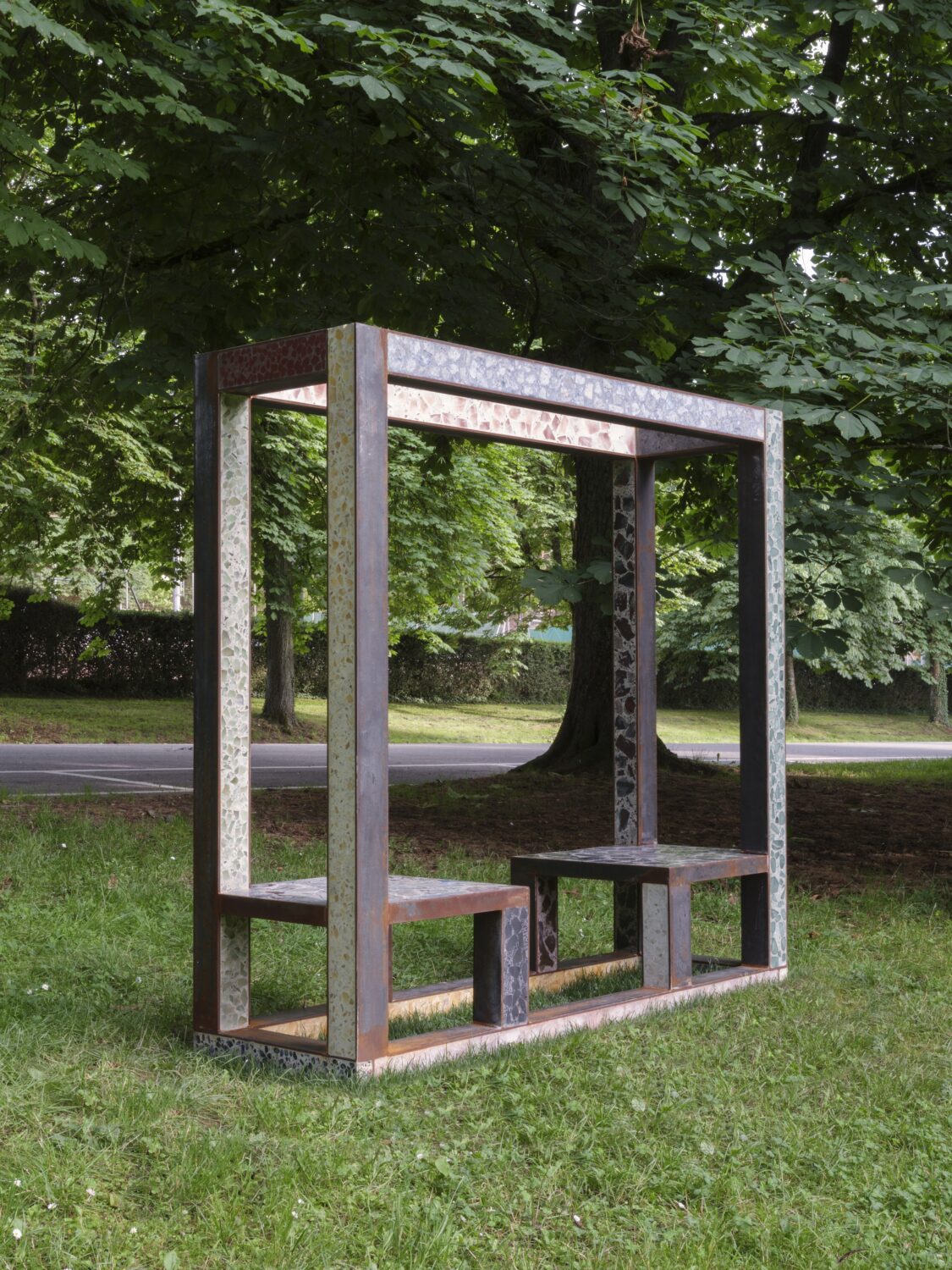 This large sculpture by the Greek artist Takis was donated to AMAM in 1983 and transmitted to MAMCO’s collection when the museum opened in 1994. Its height nevertheless excludes its display in the museum’s spaces. The opportunity to present it in the park and, after the Biennale, to find it an appropriate public location attests to the wish to develop a concerted cultural politics in Geneva. Takis chose to explore in his work the energy of magnetic fields. Like his colleagues of Nouveau Réalisme, he integrates movement, light, music, and magnets in his sculptures. Always experimenting, Takis combines references to archaic Greek sculpture and technological objects. The work presented here, from the “Signals” series, perfectly illustrates this merging of natural forces and technology, as well as classic form and modernity. 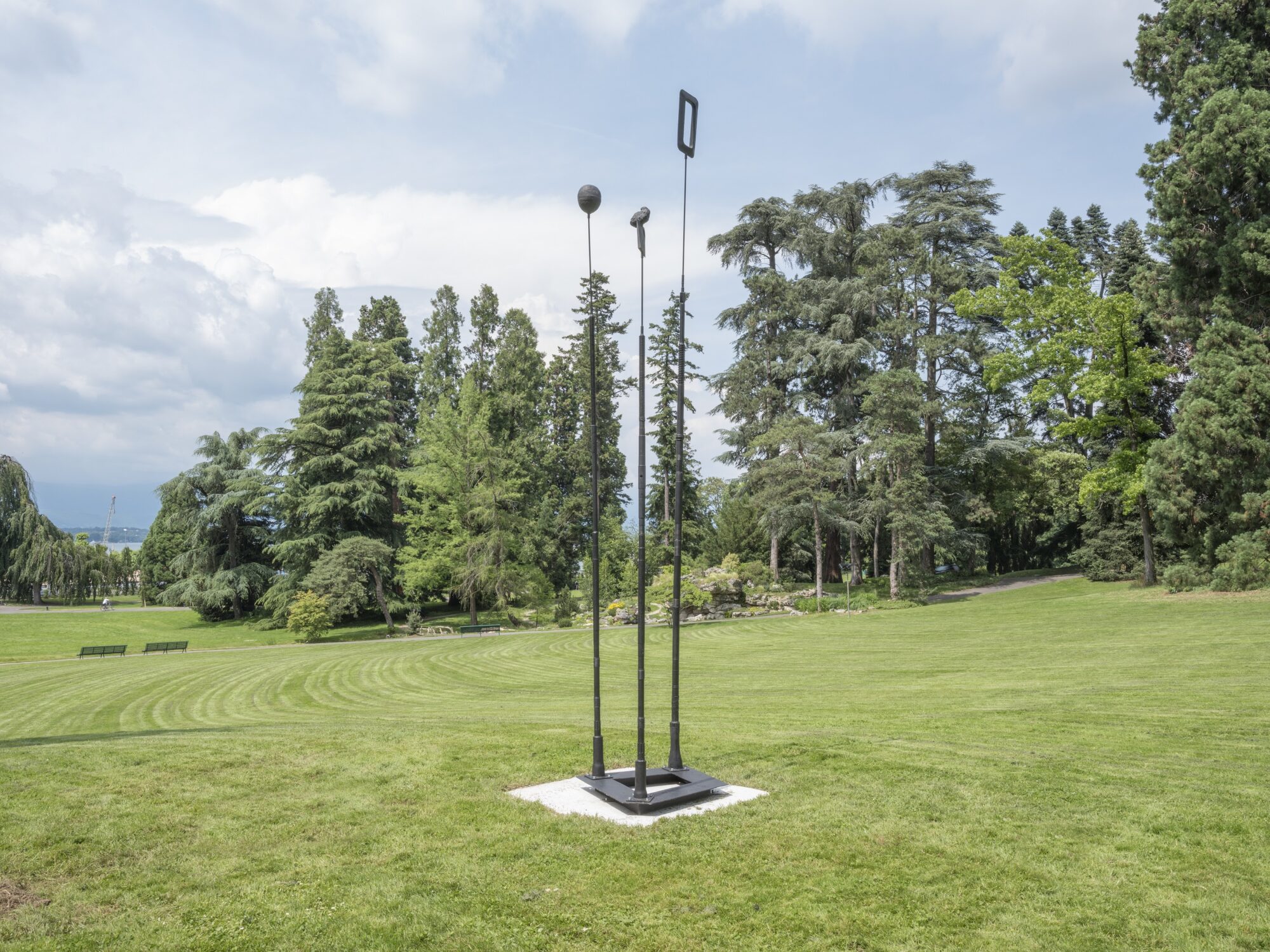